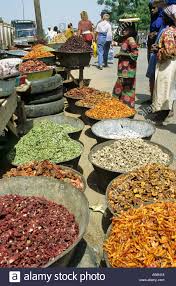 The Amalgamated Union of Food Stuff and Cattle Dealers of Nigeria (AFUCDN) has threatened to cut the supply of foodstuff nationwide if insecurity is not addressed by the Federal Government. A drastic drop in food supply would have an adverse effect on inflation and household incomes. The National President of the union, Muhammed Tahir, who disclosed this at the end of an emergency meeting of the union in Abuja, said since Governor Yahaya Bello of Kogi State intervened last three months in a move that led to the suspension of six days old industrial action, nothing has been done to address the concerns raised by the union. The union had in March 2021, gone on strike following alleged illegal roadblocks and extortion of her members and unnecessary attacks of her members across Nigeria. Tahir said after reviewing the concerns, the union also resolved to throw her weight behind the onion union that also commenced cutting off supply to the southern part of the country. He said though AFUCDN is not on strike at the moment, it may no longer guarantee industrial harmony after three weeks, should the government fail to meet the union demands.