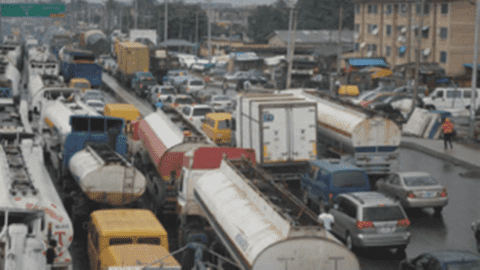 Motorists and commuters along Oshodi-Apapa Expressway and Apapa environs have continued to languish helplessly in gridlock due to activities of drivers of articulated vehicles who park indiscriminately on the highways amid deplorable state of the road.

The Lagos State Special Traffic Enforcement and Management Team set up by the state Governor, Mr Babajide Sanwo-Olu to create a new operational template as well as restore sanity after taken over traffic management from the disbanded Presidential Taskforce on Port Decongestion, has abandoned the road without any visible enforcement.

Sanwo-Olu, had, during one of his visits to Apapa ports, stressed that the sharp practices and inadequacies observed in the handling of the container operations at the ports would be escalated to the Minister of Transport, adding that the misconducts of the policemen stationed close to the ports would be reported to the Inspector General of Police (IGP).

Also, the electronic-Call Up system, tagged:”Eto” which was introduced in February, 2020 to regulate movement of container laden trucks into the ports had since collapsed as truck drivers ignore the system and opted for former arrangements of bribing their way through to the ports.

The new operational template expected to be enforced by a combined team of officers of Lagos State Traffic Management Authority, LASTMA, and the police, has been left in the hands of touts, and transport union members who are busy extorting truck drivers inorder to give access road.

The situation which has continued to worsen on a daily basis, left many motorists and commuters stranded on Sunday, as they spent several hours in traffic.

ALSO READ: We need to do more to decongestant traffic in Apapa, Lagos govt admits
The Oshodi-Apapa Expressway was completely blocked by truck drivers who parked indiscriminately on the road, leaving no access road to other road users. LASTMA and police officers who were supposed to be controlling the traffic were not on sight, leaving the highway completely shutdown.

Mr Shola Adeola, a motorist who works in Apapa, recounted his experience, saying, “Driving through Oshodi-Apapa Expressway has become a nightmare. The journey that should take me less than 10 minutes I ended up spending four hours from Second Rainbow to Berger Yard. I could not see a single traffic officer managing the traffic. The only men on the road were hoodlums and transport union members. For how long are we the residents continue in this. Government has finally abandoned us to our fate in Apapa.”

Also narrating her experience, Mrs. Elizabeth Akeju, a commuter, lamented: “I spend up to eight hours everyday trying to pass through Mile-2 to Oshodi, my destination where I do my business. No thanks to indiscriminate parking by truck drivers and deplorable road at Lacasera, along Apapa Oshodi Expressway.”

Meanwhile, chairman of the Lagos traffic management and enforcement team, Mr Toyinka Fayinka, who is also a Special Adviser to the state Governor was unavailable at press time for comments.

Reacting to the increased traffic situation in and around Mile 2 and Ijora axis of Apapa, a former President of the National Association Road Transport Owners, NARTO, Mr Inuwa Mohammed said that the Electronic call up system has not been very effective in that axis.

Inuwa also noted that security agents and hoodlums have also taken over the control of traffic between Mile and Tin-Can Island port adding that the road construction currently going on is also a factor that hindering traffic.

He opined that the take off of the Nigerian Ports Authority, NPA, electronic call was not properly done as some factors were not considered adding that there is a need to go back to the drawing board to re-strategize with a view to improving on the free flow of traffic.