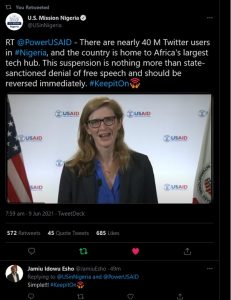 A statement released by the U.S Mission in Nigeria on Wednesday has called for the immediate reversal of the ban on Twitter.

According to the Mission, the ban amounts to a state-sanctioned denial of free speech in the country.

Meanwhile, a lot of Nigerians have blasted the federal government with others professing their support for the administration.

The Federal Government said on Friday that it was indefinitely suspending Twitter in Nigeria after the company deleted a controversial tweet President Muhammadu Buhari made about a secessionist movement.

Millions of Nigerians on Saturday were unable to access Twitter after the government enforced an indefinite suspension of the microblogging platform’s operations in Nigeria.